The wave sailing action was due to start at 9am in Klitmøller on Tuesday, after an 8pm finish on Monday. The light but prevailing south-westerly, cross shore, wind of 16-18 knots, should be enough for 17-minute heats with the sailors best two wave rides being scored.

With a window of good enough breeze in the morning there is expected to be a winner of the single eliminator contest by 12pm.

“We’re hopeful of there being wind in the squally conditions between bands of rain,” Duncan Coombs, the PWA head judge, said. “We can do it because the wind is south, south-westerly and side shore. It’s the down the line conditions. If it was on shore it would not be an option.”

“The side shore wind allows you to accelerate down the face of the wave when it’s on shore the wind drops in front of the wave.”

Robert Sand, event manager, Danish wave champion 2003-05 and Klitmøller windsurfer for 25 years on what makes Cold Hawaii:
Cold Hawaii is special because it has a lot of different surf spots that cater for any wind and wave direction.The open water from the North Sea and North Atlantic draws in the low pressure systems that gain momentum as they travel across the top of the British Isles and then hit our coast. Once the winds start pushing in from the west they build up in the deep waters of the North Sea, and join forces with the North Atlantic swell that hits our steep coastline, so the waves jack up.
On a typical day there is a strong south-westerly wind with waves breaking on the crescent-shaped reef just off the beach. The reef creates a breakwater so windsurfers can get in out easily from the shore. Then beyond the reef the wind increases in the more open water, with the large breaking swells acting as massive water ramps to jump high, forward loop and ride the giant waves. On an average day the wave’s summit can be as high as 2-3 metres, but at it’s best we have seen mountainous waves as big as 6m. As a result of the powerful brisk North Sea south-westerlies gusting up to 50 knots and colossal seas the windsurfers call this Cold Hawaii. 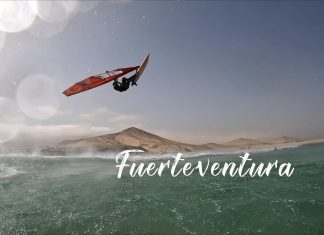