What it’s all about?
Many still don’t know where the name AC-1 derives from. However it’s nothing too elaborate but simply the initials and sail number of Andrea Cucchi put together. Point-7 founder, head of development, team manager and the man who last year decided to create a group of young professionals and have them to train together under the name BLACK TEAM. Andrea in 2013 created the team to prove that a team does have a place in windsurfing and can help riders to train more effectively and achieve better results than when training individually as has been in the norm for the last many years in our sport. The team has proven itself time and time again over this past season. From the initial stages when the team came together in Tenerife to commence their winter training, to the last event in Sylt this year. The work, the commitment and team spirit all resulted in many national and international results with a lot of young riders being able to make stand out results. Combining a strong training program over the winter allowed the team riders to train on a real race course making sure that the AC-1 was therefore tested and developed in real racing conditions for long periods of time. Not only testing the sail for straight line speeds, but checking how the sail would perform in the starts and jibing around the marks with 7 other riders closely in pursuit just as in real competition conditions for which a racing sail is developed. This level of development and practise of testing took the Point-7 gear to a new level of perfection. The dedication put behind the team and the advance made on the rig ensured podium results at any level.

What’s new
One of the last issues which was still to be worked was mainly the physical weight of the sail. The shortcut to reduce the sail cannot be by only reducing reinforcements or by using thinner materials. The effort was for Point-7 to reduce the weight of the sail, by going through the technical parts, and obtaining the weight reduction by increasing the performance of the sail at the same time. Objects need to look beautiful from the performance, construction and not only from the look.
Taking a 8.6 from zero14, to the zero15 edition, the weight reduction was of just under 1Kg: 950grams. Most of the changes for reducing weight have been done on the top or back of the sail, which means that on the water, the 1kg difference is felt even more due to the leverage. The difference in weight between the sizes change. (A 6.3 is not losing 1kg, the 9.7 is losing more than 1kg. This is due to the size difference).

The new weight reduction and new extra performances came from the following characteristics of the sail.
1-     New batten tensioners which insert directly to the 14mm tubes. This eliminates the rod which was giving extra weight in the old batten tensioner. The tube being stiffer all the way to the end of the sail, gives a cleaner exit for the wind for higher speed and stability.
2-     New batten pocket Xply construction reduced the weight of the sail drastically. The stiffer material made the sail also more reactive for acceleration.
3-     New tack faring protection is shaped for better protection where needed, and the lowered length makes it half the weight.
4-     Reduction of width, but not thickness of the dacron tapes all around the sail. You will not feel that the quality is missing anywhere in the Zero15. You will actually realize how more clean the sail looks due to this change.
5-     New top construction which makes it easier for rolling the sail, has reduced the weight as well.
6-     The new smaller head with the 2.5mil monofilm is giving a lighter weight on the top of the sail. This allows the sail to be less reactive in an area where you want less movement, bringing extra stability and control in more difficult conditions of water surface.
7-     Smaller head. Less top weight and more aerodynamic performance for higher speed.
8-     Increased winglet effect and release.  Extra power, stability and speed are obtained by the extra compression of the wind through the foil.
9-     New base outline:  Better and more efficient back rake stance.
10-  New fresh look.

Andrea Cucchi  ‘Zero14 was another amazing year for our AC-1. After bringing Alberto Menegatti on the podium of the PWA in 2013, we managed to repeat podiums with Pascal Toselli this year.  For zero15 we had to put the most energy done till now, as it’s not easy to improve something which is already giving high and winning performance. We knew our Zero14 was used as reference from most other brands to compare their own racing sails for next year. Made us proud, but gave our Black Team great homework to make sure that we could keep the extra speed edge on the race course. It was fun, as all tests we were doing were giving more performance to our sail without a mistake.  There was no hand break to thoughts. The best was to see how the sail was losing weight just by implementing characteristics which were needed to improve performance. The moment you will change the tack of the sail during the jibe, you will think, wow.  If you think of something that you might have wanted to change on the zero14, we have done it on the zero15.’ 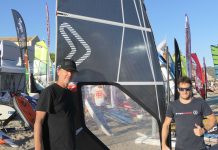