2012 Maui Makani Classic is Over…… What an Incredible Contest!!
What a phenomenal 5 days of contest here at the AWT final tour stop at Ho’okipa Maui! Everyone was in agreement that there hadn’t been a competition like it at Ho’okipa for a very long time. The biggest names in windsurfing from back in the day put up a fierce fight and an epic show against some of the top new names in the sport.
With 120 entrants, from 24 countries, 60 amateur competitors, 20 female sailors and a who’s who in the Professional division, this event was destined from the outset to be a very, very special few days. Combining the incredible entry list with some all-time Ho’okipa conditions with waves in the 12-15 foot region, spectators and competitors alike were treated to a spectacle that I don’t think any of us will be forgetting anytime soon!

Heat 46
Continuing on from the previous day’s action we started the pro double with heat 46. The pros were all super keen to get as many heats of the double elimination run as possible to further divide the fleet into more specific rankings. So as the judges ran the last of the amateurs and masters heats they squeezed in the pros and started with heat 46. Camille Juban had come 3rd in the single elimination but now risked loosing it with a possible 5th or even 6th place if he didn’t pass through the heat. But the Guadalopean never faltered and put on an impressive performance to grab 2nd place just ahead of UK man Robby Swift. Robby had a great heat landing some nice goitres and big aerials but was just outdone by Juban. Nat Gill having secured a place in the final of the single was demoted to 6th place after not quite finding his rhythm in the much smaller conditions of the day. However he definitely made his mark on the contest proving he is a serious contender in big swells. Taking the win was Brawzinho who was absolutely ON FIRE! His effortless goitres and takas and wave riding saw him literally sail into the next round.

Heat 47
And so the stage was set for Marcilio Browne to take on last year’s event winner Camille Juban for 3rd place and a podium finish guarantee. The standard of sailing from the 2 young guys was astounding. Camille was using his natural fluid style paired with tweaked aerials to try match Browzinho’s mix of aerial manouevres and super smooth wave riding. In the end it was Marcilio Browne who edged ahead with takas, goitres, and better wave selection.

Heat 48
Browzinho was on a roll and seemed unstoppable at this stage. Up against young gun, 16 year old Bernd Roediger was the task of taking his 2nd place from him and advancing to the final against Kevin Pritchard. The crowd were in awe of Browzinho’s class and style. The Live Cast was going insane after Browne landed a series of one handed goitres, takas, and tweaked aerials again, and again and again. His consistency for these maneovres is mind blowing, he makes it look so effortless which can at times be to his detriment as perhaps the difficulty in skill level is not fully appreciated as a result. Roediger responded with fantastic wave selection and paired his smooth, stylish wave-riding with some beefy one handed aerials. The kid has style! The judges were left with an incredibly difficult decision and ended up being split with a 2:1 decision in Roediger’s favour with only the narrowest of margins between the two. Either guy deserved to pass into the next round and much respect is rewarded to both as they literlly left the spectators and judges with their jaws open in amazement. Well done Brawzinho! Well done Bernd!

Final no.1 ( heat 49)
Now it was really on! Bernd, being much smaller and lighter, headed out in the 13 knot winds on his 3.8m while Kevin cruised out on his 5.3m….. quite the sight to behold the 2 guys side by side! Kevin had absolutely shredded in the beefy, double-mast high conditions of the single elimination and now had his work cut out for him in the lighter, smaller conditions. Bernd opened the heat with 2 huge rides, nice size set waves with multiple aerials and a taka and goitre. He fist pumped his way back out through the waves afterwards and his joy and stoke on the water were infectious to all who were watching…. this kid just loves to sail! Pritchard responded with some really nice rides with his classic powerhouse turns and one-handed aerials and finished the heat with by far the cleanest, biggest 360 we had seen all competition, he was ripping! However it was not enough and Bernd took the heat win and another final was run to crown the ultimate champion

Final no.2 ( heat 50)
Yet again Bend was incredible. His lightness, agility, talent and enthusiasm resulted in some of the best wave riding we had seen all contest. He was just styling. Kevin, the ultimate competitor put up a valiant response and proved why he deserved to have won the single elimination. But these were Bernd conditions, light winds and playful size waves meant he was unbeatable. And the decision was made by the judges to crown the just-turned-16 wonderkid from Maui with the 2012 Maui Makani Classic title. Huge congratulations to Bernd and all the Roediger family for his deserved success and huge congrats to Kevin Pritchard for an all-time performance and amazing sportsmanship.

After a hottly contested 60 strong fleet of amateur sailors is was down to just four men for the title. Hot sails guys Henderson and Freeman sailed solid heats with Henderson’s knowledge and style just edging ahead of Freeman. 3rd place went to Neil Turpin who had powered through his heats during the day with a combination of wise wave selection and big aerials. Karaolides sailed extremely well also and knocked out some big names on his way to the final. In the end Jeff took the win with a strong performance from Freeman in second. Well done guys! See you in the Pro fleet next year!

Masters Finals
The masters final was another tight contest with great performances from all 4 sailors. The conditions were amazing and super fun size waves. Just enough for winner Giampaolo Cammarota to prove how his Ho’okipa training has paid off. There was no shortage of waves and all 4 finalists sailed solid heats making the decision for the judges particularly difficult. Congratulations to all!

Congratulations Everybody and See you all Next Year!!
Thanks again to all who entered this year and see you all at the closing ceremony at 6pm tomorrow, Saturday November 3rd in the Maui Tropical Plantation at 6pm for prizes, food, drinks and lots of fun!! 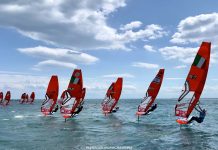