As if it knew it was time to stop, the wind dropped for the closing day of the 2012 Cold Hawaii PWA World Cup in Klitmøller on Sunday, after a week of tough competition between the best 43 wave windsurfers in the world. After three successful years of competition, Klitmøller, for decades a place of pilgrimage for the windsurfers in the know, is now firmly on the professionals trail.

“It’s an established part of the tour now,” Rich Page, the PWA tour manager, said. “Klitmøller was an event that that had been years in the development phases working with Rasmus (Johnsen, head of new media and technology at the Active Institute at the University of Aarhus) and then later with Robert (Sand, the event manager). So that when it came to fruition it was very well organised. The ‘T’s had been crossed and the ‘I’s dotted and that gave it a solid foundation. It was never going to be a flash in the pan. That hard work has paid off and we expect it to continue to grow.”
And grow it has, driving a digital revolution in the sport. In their inaugural year in 2010, the organisers of Cold Hawaii brought live streaming video technology to the windsurfing World Cup for the first time and this year the introduction of live scoring by the PWA has helped revolutionise the sport.
The effects of spectators knowing the judges scores during heats for the first time was already having a discernable effect on heats. Friends, family, girlfriends and fellow competitors, were standing on the beach and letting sailors know – albeit with mixed success – that they needed to land another jump in the heat.
“It is only fitting that Denmark was the first event where we have that system up and running being an event that has driven a new generation of live interaction and social media in windsurfing, Page said.”

The Cold Hawaii World Cup has sustainability in its DNA. From being a beacon of light in north-west Jutland, reversing the trend of population migration away from the area to recycling, Klitmøller is setting new standards that it hopes will be adopted by the whole region.
At the heart of it all is one power; the wind. “What we have in the area is sustainable energy and ability to work with nature and nearly 95% of our electricity is from windmills,” Otto Lægaard, the Thisted municipality manager of the Green Thread, said.
The old fishing villages, along the 65km of the north-west Jutland coastline that has become known as Cold Hawaii, were slowly contracting before some became a mecca for windsurfers and the nature lovers generally.
“Cold Hawaii is special because it has a lot of different surf spots that cater for any wind and wave direction,” Sand, the Cold Hawaii World Cup event manager, Danish wave champion 2003-05 and a Klitmøller windsurfer for 25 years, said.
“The open water from the North Sea and North Atlantic draws in the low pressure systems that gain momentum as they travel across the top of the British Isles and then hit our coast.”
“As a result of the powerful North Sea south-westerlies, gusting up to 50 knots, and colossal seas, the windsurfers call this Cold Hawaii.”
And they will keep coming as long as the wind blows. 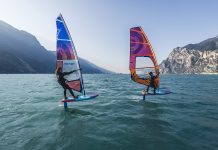