Victor Fernandez Lopez was the brightest light on the first day of competition at the KIA Cold Hawaii PWA World Cup in Klitmøller on Monday, as it seemed the organisers would make the riders compete under the moonlight. In shifty conditions veering between westerlies and south westerlies of 16-18 knots, the lack of wind was a great leveller. The competitors worried over their equipment choices like Formula One teams trying to get the right tyres as the day extended to 8pm.

With the weather forecast for tricky conditions on Tuesday, the plan is for an 8am start, when there should be a similar south-westerly, side shore wind, to what they finished in.

Arguably, the most interesting part of the day was happening off the water and Monday September 17 may be seen as an important day for the sport with the introduction of live scoring. For the first time, windsurfing fans all around the world knew which sailor was winning a heat as it unfolded, rather than waiting until minutes afterwards to find out.

It added to the tension in the closest heats. But the best can only be levelled so much and Victor Fernandez Lopez, the flying Spaniard, outshone the other stars. He popped the first and only double forward of the day at 3.30pm in his first heat to get the highest jump score of 9.5s and 10s. He needed it as Antoine Martin, the young Frenchman, pushed him all the way, scoring the best wave score of the day, a frontside 360. Both were impressive with so little speed and no big ramps.

After an hour and a half break in the day as the wind dropped the format changed, with heats extended from 15 to 17 minutes and just two waves required instead of one jump too. Fernandez Lopez was still going at 7.30pm for his second heat in the last 16 and he narrowly beat Britain’s Ross Williams to go through to the quarter-finals.

It will not get any easier as he faces Danny Bruch, the German rider, who was also one of the standout performers, in the quarter-finals.

“Victor was all-around the best today,” Duncan Coombs, the PWA head judge, said. “Not just because of the double, but also his wave riding; verticals, frontside aerials and a taka. But Danny Bruch was also impressive, that’ll be a massive heat.”

Fernandez Lopez, the 2010 world champion, who was third here last year and is in second overall this year. He has been training here for two weeks already and though he is one of the nicest guys on the tour, he looks like he means business.

“It was really hard to read the waves at the end because there was no light,” Fernandez Lopez said. “But the wind picked up and I think my last wave gave it to me. It was a difficult day with the conditions changing, you had to keep coming in to change gear otherwise you would end up downwind and stuck. I used my biggest gear, my 5.9 metre sail and my 95 litre board.” He was mainly on his 5.3 metre sail, but all the sailors faced the same tricky choices over their equipment.”

Philip Köster, who became the youngest ever PWA Wave world champion last year at the age of 17 and already has one hand on the world title after winning the first two of the four event world cup, in Pozo, Gran Canaria and Tenerife, did not have a great day by his standards, but was still formidable as the only man to manage a goiter wave move. “Philip is relaxed, you don’t get much more relaxed than Philip, it’s because he’s so bloody good,” Ben Proffitt, the British rider, said.

Köster, the Gran Canaria-raised German rider, also felt that Fernandez Lopez had the best day. “I was waiting all day at the beach, it was difficult with the wind going up and down. The waves were not too big and the good ones were hard to find. I think Victor did the best today. He connected the best with the waves.” 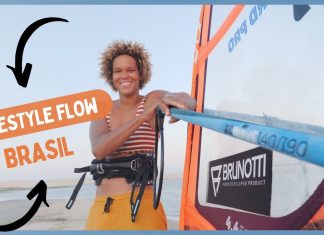