Here is the Highlight clip for yesterdays Supersession.

Thomas Traversa: The secret of how I won the 2012 KIA Cold Hawaii PWA World Cup
Thomas Traversa has revealed that the secret of his victory in the 2012 Cold Hawaii World Cup was that his friend Alex Mussolini forced him to take a bigger board on the beach five minutes before the final against Philip Köster on Thursday.
“Alex ran to get the board to me and I trusted him,” Traversa said. Mussolini, who finished sixth and is third overall in the World Cup standings, is old friends with Traversa and was acting as his caddy on the beach.
“He wanted to go out with his 68 (litre) board but I knew he needed more weight because he is light and the conditions were so light,” Mussolini said. “I made the mistake of going out with my 68 in my heat the day before and I could not get upwind.”
“He didn’t want to take it and then we went down to the beach and he said: ‘Oh now I’m not so sure.’ So, I didn’t wait for him to change his mind, I ran and got my 74 litre board. That was five minutes before the start. He then adjusted the straps and put his own sail on just in time.”
“You saw that Philip was way too much downwind. I said to Thomas it was better for him to get 10 to 15 waves (in the heat) and make two good ones, rather than only get four and then the pressure is really on.”
“You need someone like this with you on the beach, to help with your gear and mentally, so you can concentrate only what you need to do on the water.”

Cold Hawaii was Traversa’s first victory on the World Cup tour and he is still on the party wave after beating Köster, the world champion. His girlfriend is in Klitmøller with him and his friends from around the world have been posting greetings on his facebook. They have also been celebrating the emergence of a new star of the tour, at his home in La Ciotat, the town near Marseilles, where the first movie was made by the Lumière brothers.
“Lots of people have been sending me congratulations. That’s almost the best part about winning, to see my friends being so happy,” Traversa said. “My board-shaper, Fabien Vollenweider, called me immediately after the final. He was so proud. He always made my boards and I’ve known him since I was 12,” a happy and tired Traversa said.
Many of his fellow competitors on the tour have noticed a new discipline and focus in the big competitions in Traversa, who has always had talent, over the last couple of years.
But seven months ago such a victory looked unlikely after Traversa broke his left foot. That has happened three times by now. “When you’re injured you get really frustrated but it also gives you time to think,” Traversa said. “And when you go out on water again you have a different mind and you sail smarter.”
Traversa used to compete as a professional in freestyle windsurfing. It was after an injury in 2008 (again a broken left foot) that Traversa decided to change to wave windsurfing.
“I did freestyle windsurfing since I was 16 to 23-years-old and I came third on Fuerteventura in 2007, that was my best result so far – but now it’s first place in Cold Hawaii. I’m super happy about that,” Traversa said.
Next up for 26-year-old Traversa is the PWA World Cup in Sylt and then Red Bull Storm Chase. “I hope the Storm Chase will take place in Ireland,” Traversa said. ”I’ve been there a few times but not a lot of people go there. I like it there, it’s wild.”
Traversa is an explorer. “I love to travel and I’m so happy that windsurfing gives me a reason to do it,” Traversa said. “I’ve been traveling a lot with Alex Mussolini, his wife and kid and my girlfriend Sophia. I really enjoy that, going new places and windsurfing in different conditions.” This year Traversa also went to Iceland and Madagascar.
Cold Hawaii has been a challenge for all the windsurfers with constantly changing conditions and colder temperatures than many are used to. “I don’t mind the cold, once I’m in the water I don’t freeze anymore,” Traversa said.
And the final question as he prepares to leave Klimøller: how did he become the first man to beat Köster for two years?
“I was chasing the good waves to get a high score,” he said. “I let a few pass to get on a bigger wave, that was my strategy. Since I’m light I could move around a bit more than Philip. I wasn’t stressed about falling, I made a few good waves and that was enough. Philip was unlucky.” 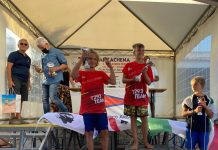