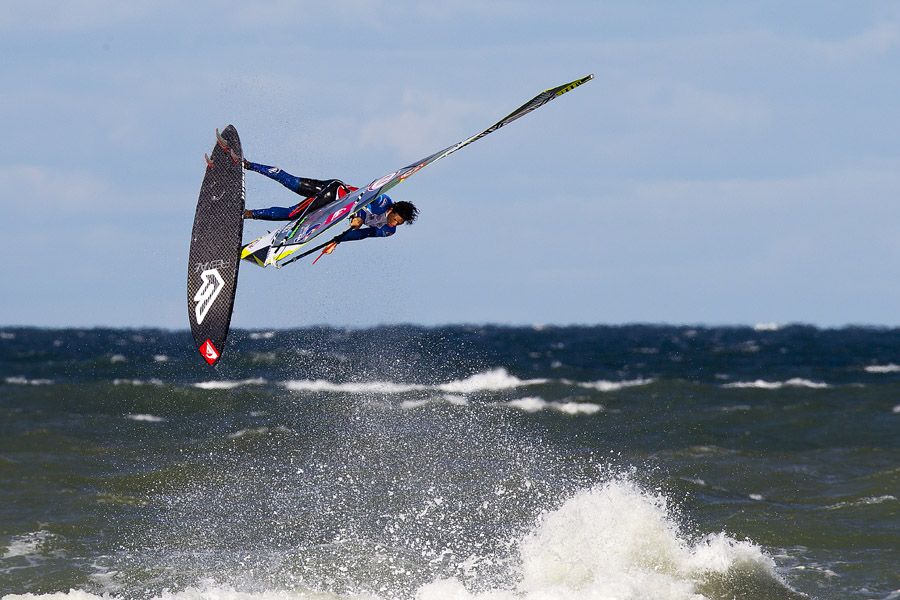 Brawzinho Roars as windsurfers try a different Tack
Marcillo ‘Brawzinho’ Browne showed what a force he would be on the tour if there were more starboard tack events, by winning the 2012 KIA Cold Hawaii PWA World Cup Super Session on Saturday.
In a lighter than expected on shore northerly wind of 15 knots, Victor Fernandez Lopez demonstrated his class in the first 30 seconds with a table forward that brought him a series of 7 points from the judges. But with one jump counting to win the heat, Browne, born and raised on the starboard tack in Brazil, and now living on another one in Maui, took the lead with an air chacho. He then bettered it with a sweet one-foot back loop that scored 8s with the judges.
“It was a little bit tricky, I’m glad I got my jumps in at the beginning of the heat because then the wind dropped and I watched the guys planing back and forth,” Browne said. “I am not used to these cold conditions so my hands were numb.”
The rare conditions in Klitmøller meant it was first time in five years – since Guincho, Portugal in 2007 – that there has been a starboard tack jumping contest on a world tour dominated by port tack venues. Even had Philip Köster, the world champion, not been a no-show, he would have found it tough to beat Browne in these conditions.
Thomas Traversa, the Cold Hawaii World Cup champion, did enter and the starboard tack and the light airs favoured him, but his back loop was not good enough to get him out of the qualifying round led by Browne and Robby Swift.
Kauli Seadi, the triple world champion and one of the most ambidextrous on the tour, made it a Brazilian day, with an air chacho, but his wet landing meant 6.5s, which was enough for third place. As the wind slackened further in the second half of the heat, the scores dropped and there was little opportunity for the six riders in the final, including John Skye, Swift and Jamie Hancock, to better their scores.
Browne paid tribute to Seadi after. “When I was 15 my father trusted Seadi to take me with him travelling,” Browne said. “Without him I wouldn’t be standing here.”

Traversa Has Reversa on Super Session on Starboard Tack
The 2012 KIA Cold Hawaii PWA World Cup Super Session on Saturday will be the first time in five years there has been a starboard tack jumping biased event on the world tour.
It promises to level the playing field for Thomas Traversa, the Cold Hawaii World Cup winner, as Philip Köster, the 2012 world champion seeks to avenge his defeat by Traversa in the final on Thursday. With 18 knots of onshore northerly breeze building in the afternoon, the Super Session, a jump contest, is scheduled to start at 1310 local time. It is not the epic wind Klitmøller is famous for, but the rarity of the conditions – especially that they have arrived during this event – make it a collector’s item. And if Traversa won a jump event,  they might have to call this unusual wind the ‘Raversa’.
“It only happens once or twice a year that you have suitable conditions, with strong winds from the north or north east, for a starboard tack jumping event in Klitmøller,” Robert Sand, the event manager and former Danish champion, who has sailed here for 20 years, said.
Traversa, from La Ciotat near Marseilles, was raised on the starboard tack, in the south of France. Marcillo ‘Brawzinho’ Browne, the Brazilian sailor, will also be contender in these conditions against the obvious favourites: Köster, Victor Fernandez Lopez and Ricardo Campello.
The tour has been dominated by port tack events over the last five years. There was an event in Cabo Verde in 2009, but that is predominantly a wave riding event. The last time the tour had a starboard jumping event was at Guincho, Portugal in 2007. Fernandez Lopez won that event, a single elimination competition, Kauli Seadi was second, Browne fourth and Traversa joint fifth.
Some port tack jumpers will probably fight shy of entering. As Duncan Coombs, the PWA head judge, explains, technically a double forward loop is just reversal of hand and foot positions, but psychologically and emotionally, some look like beginners when first attempting it.
“The difference is just that your right hand is forward on starboard tack and the wind’s coming from the righthand side,” Coombs said. “It might not sound like much but it’s all about the fact that the world tour has been on a port tack for five years, so you’re getting people not really needing to train on starboard tack. Boujmaa, (Guilloul, who was joint fifth in Guicho) from Morocco, where it’s always starboard tack, has struggled to get good results on tour and has dropped out. I would tip Brawzinho to be one of the favourites on the starboard tack.”
“I suppose it’s like comparing a backhand and a forehand in tennis. You see guys who can’t do anything on a starboard tack. It’s like watching a beginner.”
One rider said it was weird watching Köster first arrive in Maui and look like a fish out of water on the starboard tack after spending his life  in Gran Canaria on port tack. But after three years he was up to speed, if not quite so natural.
“If you’re that good you pick it up on both tacks, it’s just the fact that you have to go and train on the other side to do it.” Coombs said. 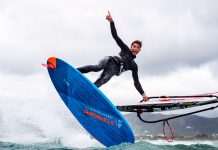 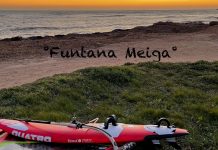 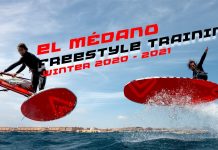 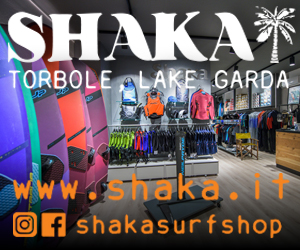 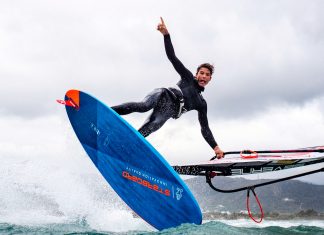 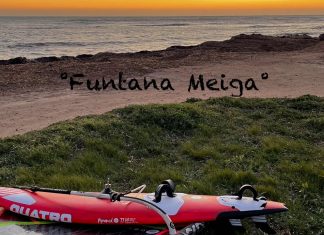