A champion is not happy to be out from the podium. A champion needs to find his motivation, be loved, supported and he will take out all his talent and hunger, to get back to the top. This has been Ricardo Campello at the PWA in Pozo. Joining the Black Team this year, working hard on development with his team, and in Pozo just not making the 1st place by 0.3 points.

With 11 fresh stitches on his foot, he went in the water like a real warrior, defeated Philip Koester at his home spot, and advanced all the way to the final. The Monkey is now hungry for more and ready to become a Tiger and hunt further! For Point-7 an honour to have jumped first time on the PWA wave podium with the Black Sails.

Change of sponsors and back on the podium. How does it feel?
Amazing , im super happy , after 3 years not being on a podium I was a bit frustrated , my old sponsor put a lot of pressure on me and maybe thats why i didnt do so well , Now im much more relaxed and have no pressure from anyone  and this is a big help , like I said , a change is good!!  also my equipment is working amazing !

What was the reason of your success?
I just focused and try to gain confidence again , I was relaxed and had no pressure from anynone , plus I went to pozo 2 weeks before to train and get ready and my gear felt really comfortable and I felt good on the water !

What did you feel after you cut your foot even before competing? Most were thinking you were out of the game.
To be honest I think everyone thought we were not going to compete again due to the conditions but I said to myself and everyone , If I have to compete I will go full power , I wont stop because of 11 stitches , after everything  me and my new sponsorts did to get everything ready im not going to give up that easy!

Was it stopping you to push more?
not really , once you on the water competing you are only thinking of doing a good heat , your body is super hot and the adrenaline is full power.

How is the foot now?
its actually really good , of course im not sailing yet because I want to make sure Im ready 100% for the next event , but its actually a pretty clean cut!

You managed to kick out Koester from his home spot. How did you handle the heat knowing that he was the man to beat?
Well , honestly I thought I lost , because I couldnt jump for the first 5 minutes of the heat and he did a massive stalled double forward right on top of me , but I didnt see the landing , I thought he landed it clean but he didnt he crashed after so I was the whole heat looking for that ramp to make a stalled double forward as well but coulndt  find it , I think he didnt have his best jumps and I didnt have my best jumps either , the waves were small and hard to get , I did have a really high score wave with a 360 and thats what made me win because we were tied on points but the tie brake was who ever has the highest scoring waves !! Im super stoked to beat him at his home spot after years of being unbeatable !!

0.3 points away from winning, missed the 1st place by a very small difference. Are you still happy or thinking of the missed chance?
Im happy , of course I wanted to win and I had everything to do it , but the waves were really small and I was unlucky selecting the good waves , victor had an amazing wave with a goiter and I was looking for a 360 section but couldnt quite get it! but still its a good begging of the year for me !! im happy

How were the conditions for you in Pozo?
Small waves , but just enough to compete , I was using my 4.2 Salt Campello edition and my 82 liter board! , on the final I swapped gear and changed up for 4.5

You managed to get the colours you wanted on your gear? Was that hard work?
Umm with patrik at the begining he said he didnt like it , now he loves it , he said its the coolest equipment out there and Im happy that my new sponsors spoiled me a bit hahaha!

How do you feel with the new sails?
Really good , the sails are working amazing ,we did everything I wanted on a sail and it feels my needs , they are really good!

Your next event? Will the foot have enough time to recover?
Yep its almost ready , tomorrow Im taking out the stitches and hopefully as soon as we get conditions Im out there!

This is another dream we had in our mind in Point-7. We wanted to show that our sails are not only able to become Vice World Champion in slalom, but that we develop and build high level performing sails in all disciplines. Ricardo has been pushing us to include in our development all he needed to get there. We did not limit his dreams, and we did everything possible to give him what he wanted. We are proud to have this kind of warrior on our team, who did not surrender even with 11 stitches on his foot, doing one handed, and footed aerials, keeping in the strap the foot with the cuts. The boy is hungry for more, we love it!
Andrea Cucchi 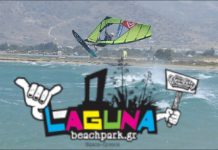 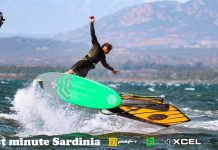 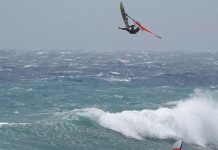 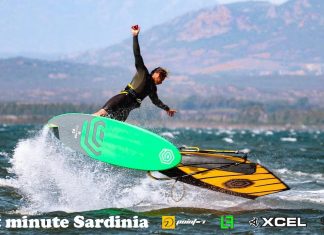