Lena: “With a rainy forecast on the West Coast Catarina Stenta and I decided to head South to the Cape of Good Hope in search of some wind and waves! Arriving there we are the only car in the Carpark! After some initial hesitations we decide to rig and go anyway! Maybe not the best conditions of our life’s but it still felled pretty amazing to go out in the mystical place with only the two of us in pouring rain! I am not going to lie I was thinking of sharks during this whole session …… hahah This Vlog is also starring young windsurf talents Marc Pare Rico, Arthur Arutkin and Julian Salmonn, who arrived just as we finished our first session! As always they are ripping it up and making it look effortless!” 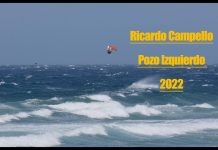