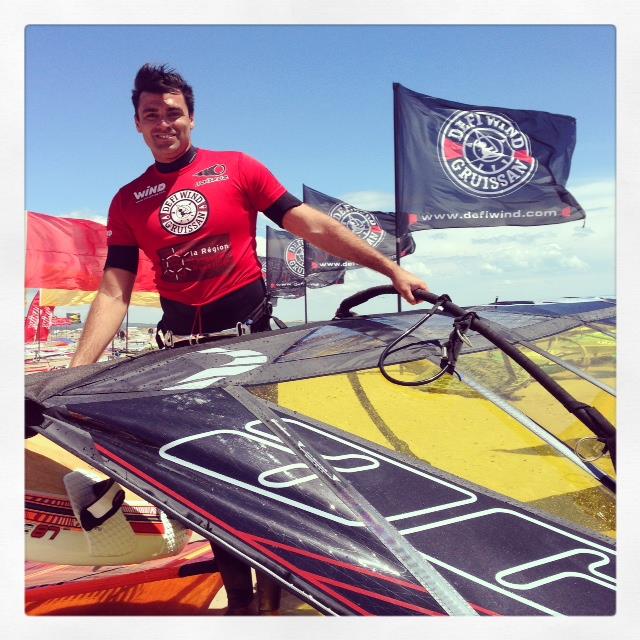 The tone is set right from the start of Saturday. The Tramontane is here, and already blowing at over 40 knots. The day will either be dantesque or nothing at all. By the middle of the morning, the anemometers are speechless, force 9 winds are blowing offshore and threatening clouds are building over the hinterlands. There is a possibility of 70 knot gusts later in the morning. The briefing is postponed and the race will have to wait until conditions become more human. The clock strikes eleven and the weather forecast looks more acceptable. Everybody gathers in front of the stage, the contestants are all anxious to find out what fate has in store for them.  Philippe Bru and Franck Roguet remind everybody that humility is necessary when faced with the elements. Discussions centre around route, safety and how to act on the water. Everyone then returns to the rider park to prepare their gear. Apart from the elite, nobody questions what size sail they should use; the smallest possible and then it is just a question of destiny. Despite wind conditions that almost no challenger ever experiences, several hundred contestants prepare to race. Sailing through a storm is a sort of Holy Grail, a secret dream that everyone has, to be able to say “I was there, I did it”. It’s now or never. Close to 700 take to the water. Even Raphael Philippi and Régis Bouron did not hesitate for a second to set off in tandem.

The wind sets in at force 8 to 9. No normal race could take place in these weather conditions, but the Defi is no normal race. The start of the first round goes smoothly and the cloud of sails stretches out towards Port La Nouvelle. On shore, the spectators who have turned out in mass do their best to stay standing on the beach, squeezing together along the seawall, immortalizing the scene with their telephones and trying hard to believe their eyes. After the first straight stretch, the heavy weights are all there but not in the same order. New faces have entered the top 10. Moretti from Hyères, a former professional racer, is ahead of all the others. Anders Bringdal or Gérald Pelleau fall at the jibe, this gives an idea of the technical difficulties of this race. Patrice Bélbeoch is slightly behind; he’s sailing with a 5.7 sail and will fight with this excess power throughout the round. At the end of the first tour, all the contestants who moved in towards the shore to find an easier section of water are obliged to get down to turn round the sailboat that marks the race opposite the village. It’s like seeing missiles arriving: Moretti falls, Nicolas Warembourg, who was waiting for the storm, takes the lead ahead of Diony Guadagnino and takes it all the way to the finish.

Of course, what goes on at the front is essential. The great racers demonstrate what a fabulous sport windsurfing is and how cleverly renewable wind energy can be transformed into a speed race and make it possible to finish such a long course in under an hour. Other stories are being written further back. The new generation of French under-twenty competitors make the most of the event to cut their teeth. They are fast and not to be dismissed in the general ranking. Finally there are those who make up the essence of the Defi, the enthusiasts: “At home” admit Théo and Florian, 15 and 17, from the East, “a strong wind on our lake means one day at 30 knots in the year”. A little overwhelmed by the violence of the Tram’, they couldn’t race, but went out on the water to test the southern weather and had a great time. Despite his impressive size, Antoine, a windsurf teacher in Carnac experienced the same thing. He set off with a 5.2 but had a hard time and could only manage one return trip. Some of the contestants gave up after one tour, including Thierry from Bordeaux. Others gave up even before they began, like Martine who despite coming from Brittany found the conditions just too demanding. They are happy to have had a chance to test their luck; this is the philosophy of the event. For the amateurs who stayed in the race, things were difficult but the end result is positive. A large majority finish the round and the impressive safety facilities had no crisis to handle. With a ground wind of 90 km/H, it is proof that these windsurfers are true sailors.

LAST RACE ON SATURDAY, BEFORE THE PARTY

Faces are marked by the effort and even the professionals had to draw on their inner strength. Anders Bringdal admits having problems with his arms, Julien Bontemps, Olympic Vice-Champion 2008, said “it was just incredible”. When the last contestants make it back, Philippe Bru declares “we don’t waste the Tram’” and another round is launched at 4.00pm, with just one return trip. The start is given in slightly less violent winds but 40 knots all the same, and results in a giant game of mikado. Lots of the contestants, who are tired now, are tricked by the calmer conditions and fall, taking others with them. It’s the German Denis Standhart who wins this last round of the day ahead of Pierre Moretti. Hundreds of spectators applaud them. Anders Bringdal, who crossed the line in first position, is ultimately disqualified for not having signed before taking to the water – a shame! The race management announces a new round tomorrow just before the first notes of Saturday’s concert resonate. Defi Wind is definitely a great showcase for windsurfing and an exceptional event.