FUERTEVENTURA WAVE CLASSIC – DAY 2
Day 2 saw an early skippersmemting at 8:30 at the reception of the Oasis Papagayo Hotel in Corralejo. An hour later the competitors met at the little village of Majanicho. Everybody was there except Amanda Beenen, who rested her leg in an elevated position to bring the swelling of her ankle down.
The organization decided together with the riders to drive to a spot called “The Bubble” or also known as “The Right (“Derecha”). The wind was howling from south easterly direction and the waves were breaking really close to the shore. It looked very difficult and the organizer Orlando Lavandera decided, that all participants and the media crew move to Majanicho.
Majanicho was really crowded. It was Sunday and several kite- and windsurfs were sailing at the point already. The conditions looked good, so the competition got started with an skippersemeeting at 12:00 and the first possible start at 12.15.
The heat duration was set to 30 minutes, with 5 minutes transition time and the best two waves counting. Heat 1 got judged by the riders of heat 3. Heat 2 got judged by the riders of heat 4 and so on.

Heat 1: Iballa Ruano Moreno, Nicole Boronat, Fanny Aubet, Amanda Beenen (she did not compete due to an ankleinjury)
The competition started with the ladies heat and we saw intense waverides of Iballa Ruano Moreno, who were on a 4,2 and her smallest waveboard with a twin fin setup. She stated after she took the victory in her heat: “I had one really good wave with an excellent Aerial off the lip. It was an ok day, as I had missed some big waves in my heat due to the fact that it was really crowded out there.“
Nicole Boronat was one of the opponents of Iballa. As a local, she knows the conditions at Majanicho very well, but felt really overpowered. The wind picked up in gusts over 30 knots and she had a very hard time in the extreme offshore conditions.
Heat 2: Dario Ojeda, Yannick Anton, Jules Denel, Stephane Etienne
Some minutes before 1.00 the first heat of the men got started. It was tough. But Stephane Etienne made most out of the conditions and got the second highest score of the day, as he had two aerials off the lip on one wave and was able to ride the waves with a lot of drive. Jules Denel and Yannick Anton came in second with equal points. Jules struggled with a lot of pain at his big toe and Yannick cut his foot pretty deep. Dario, the fourth one in this heat broke a boom, had to return to the shore, changed boom and sailed back out again. He missed almost half of the heat. Stephane stated after his heat: “It was really hard to choose the right wave today. The best ones were the medium sized waves out of my view. I took 20 waves, but only had 2 good ones in my session.”
Heat 3: Tom Hartmann, Andrew Fawcett, Will Ward, Jose Romero
Heat 3 saw excellent conditions, but dropping wind. Will Ward took a lot of risk, didn´t take care too much about the heavy Sunday traffic at the peak and took many waves. He had a lot of speed in his turns and got the highest score of the day, with 37 points. Andrew Fawcett, as well a Witchcraft rider, like Will, from Cornwall – came for the third time to Fuerteventura´s North Shore, impressed with high skills and a lot of routine in the mushy waves and scored 31,5 points for his presentation. Tom Hartmann followed in third, but he was a bit unlucky, as he lost his board and had to swim in the last 10 minutes of the 30 minute long heat, not being able to get points. Jose Romero, the young Gran Canaria local, struggled a bit in the difficult conditions, but still got some nice waves to ride.
Heat 4: Justin Denel, Federico Infantino, Francisco Casas Garcia, Alberto Ferroni
In the last heat of day 2 the wind dropped massively, but the young Italian sailor Federico Infantino kept his nerves and took the victory in his heat. He is an extremely light sailor with around 60kg and for the first time on Fuerteventura. The Italian was still able to use his 76 liter board with a 4,3 m sail. Young talent Justin Denel followed in second position, just 1.5 points behind the Italia­n. In the fight of the youngsters Cisco Casas Garcia from Almeria, Spain had also nice waverides and was just 2,5 points behind Federico. Albert “Mandrillo” Ferroni had not too much fun in this very light conditions and did not understand, why the heat got not cancelled.
The skippersmeeting will be at 9.00 tomorrow morning. The wind should blow more from north eastern direction. The plan is to run one more round at Cotillo or again at Majanicho. 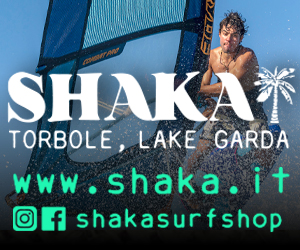 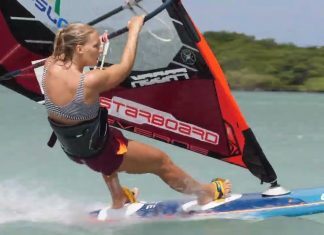