Lena Erdil Tur33. One of the fastest girls on the planet, with top speeds in the Luderiz Channel, second in the PWA Slalom 2014, manager of her windsurfing centre in Bodrum, and with big passion for wavesailing. Point-7 is happy to announce Lena joining the Black Team from Point-7 and read more about the projects they have put together!

Your sail number is TUR 33, but what are your origins?
Yes, I sail for Turkey, but when asked where I’m from its always  a difficult question for me, so let me give you a quick breakdown:  My mum is German, my dad  is Turkish i was born in Turkey but moved to Germany when i was 2 till I was 10, then we moved to Belgium till I was 18, then I went to university in England for 3 years and have since moved back to Turkey. The place that feels closest to ‘home’ is Bodrum in Turkey now, where I also have my windsurf centre and spend around 8 month a year!

How did you end up in Bodrum?
Since I was little we always spend our summer holidays in windsurfing centres, my dad was involved in the running of several different Centers in Alacati, but in 2007 we wanted a change of scenery and thanks to the mayor of Bodrum we got offered to set up a centre in the windiest bay on the Bodrum peninsula, Ortakent. We have definitely not looked back since, Bodrum and Ortakent is absolutely beautiful, and has special termical wind that blows pretty much every day throughout the summer month !

Bodrum is less famous than Alacati. Is this only in our mind because of the PWA? What are the differences between the spots, and why should we choose Bodrum to Alacati?
Haha yeah actually Bodrum is a lot more famous than Alacati, it is known for its abundant Nightlife, beautiful sea, massive Marinas and rich history. It’s the most popular holiday destination for Turkish people and also more and more popular with tourists from abroad. Bodrum has its own airport and charter flights fly directly from Europe to Bodrum, which makes it very easy and also most of the time cheap to reach. Compared to Alacati, Bodrum has a much bigger all year round population, nature wise its a lot greener, the summer season is longer but also hotter due to its location further south then Alacati.  Both places have great wind and are perfect for flatwater windsurf holidays!

How did you start windsurfing?
I don’t even really remember my first time on a windsurf board, both my parents windsurf and windsurfing has been in my life since I was born. I think my dad first started teaching me to windsurf when I was around 8.

When did you think to compete?
I started competing in national races in turkey when I was 13, it was just for fun at the beginning, but I quickly started to beat some of the best women in Turkey at the time and it really motivated me to pursue first place! My first race abroad was the ‘mondial de vent’ when I was 17, in France, it was so fun meeting all the professionals and the race was so windy, I absolutely loved it and decided I wanted to do more, what could be better than travelling the world windurfing and competing!?! From there it has been a long but very fun journey to being where i am now!

You have your own centre in Bodrum, how do you divide your time between competing and the centre?
In 2013 I was trying to do everything in the centre and compete at the same time and I really saw my competition results affected by this choice, I wasn’t able to focus on the racing enough specially as our centre also has a bar and a restaurant and managing all this was really challenging. This year my parents helped me a lot with the centre which was great as it allowed me to focus more on my training again!

Speed, slalom and waves. You do every discipline, how do you train for all the different disciplines?
Well speed and slalom are very similar, I don’t actually train much specifically for speed, what’s important here is the equipment, I’ve been lucky to have been able to use Patrik Diethelms many years of speed experience, he has been mentoring me for the speed challenges in Lüderitz. For waves unfortunately I can only ever train in the winter, as in summer I’m in Bodrum where we dont have waves.. probably better for my slalom career 😉 I have however spend the last 3 winters trying to improve my wave sailing and will try and join the PWA wave world tour for a couple of stops next year. How do I train? I just try to spend as much time as physically possible on the water.. 😉

Your best results for the different disciplines?
In speed I’m officially the second fastest women in the world over 500m and actually have the fastest 2sec average on GPS-Windsurfing!
In slalom my best result is this years PWA 2nd place in the overall !
For waves I have never competed at all, not even a fun event or a national championships so this could be very interesting to follow..

Which you like better and which is more fun to obtain a good result in?
I must confess that I prefer wavesailing to slalom sailing  when it comes to free sailing! BUT I do love competing in slalom, racing against all the best girls in the world is a really great feeling and achieving good results is definitely a massive stoke!

Which is more suitable for the girls?
I do want to say wavesailing, as all the equipment that’s needed in slalom sailing can be a lot of hard work and most girls I know are not that into sanding, measuring and working on the technical development side of equipment.. Of course there are expectations but so far this is still my least favourite part of the game. With wave sailing you can just rig and go, in the end personal performance and wave selection will be a lot more important than equipment. Also I think a lot of girls would prefer the more free nature of wavesailing compared to the sometimes very tough racing, where it’s not just you against the ocean, but you against everyone else on the starting line .

Your sponsorship from Point-7 is a partnership with Oakley, how does that work?
The two companies have previous ties and as Point-7 is entering the Turkish market this year with a new distributor and Oakley is interested in using the brand to represent their image in the extreme sports scene in Turkey, I was a good match for them to represent them and the brand as rider in Turkey and the world. I think it’s one of those situations where I was the right person in the right place at the right moment, and I hope that we can make some exciting project happen with this new partnership in the coming years.

So what are the project you have in mind for 2015 to please your partnerships?
One of the biggest projects I have in mind is a long distance crossing from Turkey to Cyprus at the end of March. Turkey and Cyprus have quite a complicated history as the island is half turkish and half greek, wich has caused many diplomatic conflicts in the past. I have never been to Cyprus and I’m looking forwards to learning more about this place!

We are coming out with the a project dedicated to the girls. Do you want to be the first to announce something or should we keep it still secret to who is reading us now?
It would be an honour to announce it! I’m so excited about this project and really stoked that Point-7 is interested in developing the girls side of things. In 2015 we are launching the #point7girls team, we will be developing a special girls line of the existing sails, which will have different colours, different lighter materials and lower boom cut outs and clew holes. We’ll also have some special matching thin booms and other apparel, so be prepared to get wowed by the most stylish sail and apparel combos ever! We will also be launching a special new Facebook page where we will share tips and tricks about equipment settings, our latest travel stories as well as some special training tips on land and on water!

It’s hard for the pro man riders to have relationships with girlfriends due to the continuos travelling, is it the same for the girls? Are you single?
I’m in a relationship with my boyfriend Simon for 4 years now, I know it can be really difficult because of the continuos travelling, but I’m lucky as Simon also works in Ortakent and his job is flexible enough to allow him to come to some of my competitions. As he also works in tourism,  in the winter, he is free to travel for a few month.  I think it’s definitely hard to find a girl/boyfriend who can share the lifestyle except for fellow competitors I guess.

Which will be your first event this year?
Well the official event calendar hasn’t been released yet but I think it might be Korea in May.

Why Point-7?
Point7 has grown quickly in the last few years and I really like the approach the brand has towards its team riders and their style. Getting the chance to help to develop the girl side of things with this cool brand is also something that really excites me! Of course the amazing performance of the race sail has also been a major factor while making my choice!

Andrea Cucchi ‘Signing Lena is a new adventure for us. It worked out through the synergy between our brand and Oakley in Turkey. There are a variety of different projects where Lena will be involved with her sponsors, and for us it’s a big plus. We will be happy to meet Lena also at her windsurfing centre in Bodrum to organize some events with her and our friends. Lena is motivated, professional, and these are important factors to be part of the Black Team. Her life is dedicated to windsurfing 100%, just like ours. We put together a nice Pro Team with girls this year, as a new project. We started strong by pushing our slalom products. We created the Black Team philosophy to have new talents to train together and bring them to the podium. Alberto Menegatti and Pascal Toselli as an example where from being out of top 10, we got them on the PWA slalom podiums. In freestyle we have Nicolas who did a great job this year, especially in the indoor event in Warsaw. Our latest challenge was bringing back Ricardo Campello on the podium to show the potential of our wave gear, and we managed together to get his first victory in a wave PWA event, exactly at La Torche. So what could be our next step, apart from now getting Maciek and Jordy to reach the level of Alberto and Pascal? Working on this new project regarding the windsurfing girls. Not only for the results, but we believe and see that lot’s of girls windsurfing, or starting to windsurf. The gear is so much easier. So it was a need for us to start a new challenge, and develop more this section into our brand. Welcome Lena on to the Black Team of Point-7’. 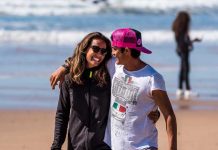