Day 3: Julien Quentel assumes control at the top, as Sarah-Quita Offringa continues to look seemingly unbeatable
The wind kicked in earlier than anticipated on the third day of the Pegasus Airlines Alacati PWA World Cup allowing just over five hours of racing to be completed. By the end of an intense day of competition a further two races were completed as Ben Van Der Steen (Tabou / GA Sails / Mystic) and Pascal Toselli (Starboard / Point-7) claimed the bullets in the men’s, whilst Sarah-Quita Offringa (Starboard / Mystic) maintained her perfect record – consisting of four victories out of four.

Men’s
Elimination Three
Winners’ Final
Julien Quentel (RRD / NeilPryde) made the best start in the opening winners’ final of the day, but it was Ben Van Der Steen who broke into the lead by the opening gybe ahead of Josh Angulo (Angulo / Gun Sails), Quentel and Tristan Algret (Patrik / Loft Sails / Mystic). The flying Dutchman remain composed and continued his blistering speed to open up a significant advantage over his closest challengers, Angulo and Quentel, as he went onto his secure his second victory out of the three races completed so far. However, after Algret dropped his second gybe, Britain’s Ross Williams (Tabou / GA Sails / Mystic) moved into the top four, but the drama didn’t stop there as Angulo also catapulted on the exit of his final gybe, resulting in him finishing last having held second place. As a result Williams climbed into second place followed by Quentel in third and Antoine Questel (Starboard / Loft Sails) fourth.

Elimination Four
Winners’ Final
Into the second winners’ final of the day and Pascal Toselli (Starboard / Point-7) timed his start to perfection to break into the lead from the word go. As in prior events this season Toselli’s board speed was second to none and he rounded the opening buoy in the first place ahead of Antoine Albeau (RRD / NeilPryde), Julien Quentel – who executed a great gybe to overtake Cedric Bordes (Tabou / GA Sails) for third and fourth. The top three remained unchanged after the penultimate gybe, but Gonzalo Costa Hoevel (Starboard / Loft Sails) seized the opportunity to dive down the inside of Bordes to take fourth place. After safely navigating the final turn Toselli stormed down the final straight to claim his first bullet of the week in front of Albeau, Quentel and Costa Hoevel. After the completion of race four Julien Quentel assumed the position of event leader after overtaking Pascal Toselli in the rankings. The man from Saint Maarten produced fantastic performances in each of his last three eliminations to record one bullet and two, third places to lead at the midway point of the event.
Elsewhere Jordy Vonk (F2 / Point-7) was unlucky not to qualify for the quarterfinals. The young Dutchman held fourth place as he approached the final mark only to have Fred Morin (JP / NeilPryde) lose his footing on his gybe and inadvertently take out Vonk in the process, which allowed Giorgos Sakantaris to sneak into the top four alongside Ludovic Jossin (Patrik / Loft Sails), Sylvain Moussilmani (Simmer) and Gonzalo Costa Hoevel (Starboard / Loft Sails).

Elimination Five
All but the final two heats of race five have been completed as the evening wind became too fickle to allow its completion. First of all Ben Van Der Steen’s topsy turvy week continued as he failed to qualify for the semifinals in each of his last two races after his victory in race three – undoing the majority of his hard work. However, race five did give Bjorn Dunkerbeck (Starboard / Severne / Chris Benz / Dunkerbeck Eyewear) something to smile about as he won every heat so far to qualify for his first winners’ final of the week. With stronger wind being predicted for tomorrow the terminator could prove to be the danger man.

Women’s
Elimination Three
Winners’ Final
Sarah-Quita Offringa led into the opening mark – as she has done in each of the other two races – and from here the Aruban gem didn’t look back as she extended her lead over the remainder of the course to cruise to her third victory in a row. Behind her, Delphine Cousin (Starboard / Loft Sails) claimed another second place finish as the reigning world champion held off competition from local girl Cagla Kubat (Starboard / Loft Sails), who took home third. Japan’s, Fujiko Onishi (Starboard / Loft Sails) overtook Valerie Ghibaudo (Tabou / GA Sails / Mystic) as they finished in fourth and fifth respectively.

Elimination Four
Winners’ Final
The fourth women’s winners’ final saw another dominating display from the seemingly unbeatable Sarah-Quita Offringa as she led from start to finish once more. The lady from Aruba’s latest victory means that up until this point she had won every heat she had competed in so far this week – keeping her 100% record intact. After an excellent third race, Fujiko Onishi, produced an even better performance as she clinched second place. Meanwhile, Delphine Cousin moved into third place after Lena Erdil (Patrik / Loft Sails / Mystic / AL360) and Valerie Ghibaudo collided at mark three, which ultimately allowed Marianne Kaplas (Starboard / Loft Sails), Ceren Yaman (Starboard / NeilPryde) and Ayako Suzuki (Tabou / GA Sails / Mystic) to leapfrog up the ladder.

Elimination Five
The women have also been whittled down the just the winners’ and losers’ finals in race five, but up until this point there has been no major upsets.
The forecast for tomorrow promises to provide another action packed day of racing with the strongest winds of the week being predicted right throughout the day. Skippers’ meeting has been called for 10:30am again tomorrow morning with the action commencing from 11am. Don’t miss any of the exhilarating racing by tuning into www.pwaworldtour.com where you’ll be able to follow the amazing action as it happens via the PWA live stream and live ticker. 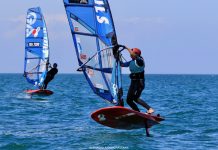