Alacati produced another brilliant day of racing for the fifth consecutive day as winds of 10-22 knots arrived by just before 1pm – allowing a further two winners’ finals to be completed in both the men’s and women’s divisions. Pascal Toselli (Starboard / Point-7) claimed his second bullet of the week, before Antoine Albeau (RRD / NeilPryde) kept his event title hopes alive with victory in race eight – meaning we a due to see a grandstand finish between him and Julien Quentel (RRD / NeilPryde) – with just two points currently separating them. In the women’s Sarah-Quita Offringa (Starboard / Mystic) added yet another bullet before Lena Erdil (Patrik / Loft Sails / Mystic / AL360) delighted the Turkish crowds by claiming her first elimination triumph since Aruba in 2011.

Men’s
Elimination Seven
Winners’ Final
Ben Van Der Steen (Tabou / GA Sails / Mystic) made the perfect start to heat 16 as he crossed the line in first place, however the Dutchman’s lead didn’t last for long as Pascal Toselli rounded the first buoy in top spot. Behind the Frenchman at this point was Cyril Moussilmani (Starboard / Severne) followed by Julien Quentel (RRD / NeilPryde) and Malte Reuscher (RRD / Challenger / AL360). From this point on Toselli continued to lead and was soon claiming his second victory of the week, whilst the top four remained unchanged.
There was major drama in the opening semifinal as Antoine Albeau suffered a broken mast as he attempted to pump out of the second gybe, whilst holding a place in the top four. With the reining world champion out of contention this presented Julien Quentel with the opportunity to bring the event title within touching distance. However, it wasn’t plain sailing for Quentel as he had to battle his way back from sixth or seventh place at the opening mark to qualify for the winners’ final. The Frenchman remained calm and soon secured his place in the top four, before taking home third in heat sixteen to cement his place at the top of the rankings.

Elimination Eight
Winners’ Final
The second final of the week was finally completed at the third attempt of asking. Pascal Toselli was extremely unlucky again as he saw another winners’ final cancelled whilst in the lead due to poor wind. The Frenchman’s misery was then further compounded as he crossed the start line early, together with Ludovic Jossin (Patrik / Loft Sails), to be disqualified. The third time around saw Malte Reuscher make the best start, but Israel’s Arnon Dagan (RRD / NeilPryde) held the lead by the time the fleet approached the opening mark, followed by Antoine Albeau, Reuscher and Pierre Mortefon (Fanatic / North). Albeau soon stamped on the gas to blitz down the second straight where he overtook Dagan to move into the lead, and he didn’t look back from here as the big Frenchman claimed victory number two to keep himself in the event title hunt.
Elsewhere, Arnon Dagan produced a brilliant gybe to dive down to the inside of Maciek Rutkowski (Patrik / Point-7) at the third to pinch the final qualifying place from heat twelve. Meanwhile, in Rutkowski’s previous heat – 8 – the Pole benefitted from a slice of luck as Ertugrul Icingir (Patrik / Point-7) inadvertently hooked in mid rig flip to go down at the final mark, allowing Rutkowski to claim fourth place. Heat 13 saw Pierre Mortefon, Ludovic Jossin, Julien Quentel and Antoine Questel (Starboard / Loft Sails) all qualify without having to sail after Matteo Iachino (Fanatic / North), Ross Williams (Tabou / GA Sails / Mystic), Taty Frans (Starboard / MauiSails / Mystic / Maui Ultra Fins) and Amado Vrieswijk (Starboard / Severne) all jumped the gun to be disqualified.

Women’s
Elimination Seven
Winners’ Final
In the opening winners’ final Sarah-Quita Offringa made the best start and held her lead into the first mark. As so often this week, she was simply unbeatable and this is how it played out again today as she claimed victory number six out of seven. Reigning world champion – Delphine Cousin (Starboard / Loft Sails) – in the meantime had to settle for second place, closely followed by Lena Erdil, Cagla Kubat (Starboard / Loft Sails) and Valerie Ghibaudo (Tabou / GA Sails / Mystic).

Elimination Eight
Winners’ Final
The final winners’ final of the day saw a turn up for the books as the usually impeccable Sarah-Quita Offringa arrived extremely late for the start. In fact SQO was so late that she rounded the opening buoy in ninth place. However, at the front of the pack Ghibaudo led ahead of Lena Erdil, Fulya Unlu (Starboard / Severne) and Cagla Kubat. The 2012 world champion looked to have things sowed up, however Erdil was able to claw her French rival back in to move into the lead by the exit of the penultimate gybe. Soon Erdil was celebrating her first elimination victory since Aruba in 2011. This resulted in Ghibaudo finishing second, ahead of Unlu, third, Delphine Cousin, fourth and Offringa, who battled her way back fifth place.
The skippers’ meeting for tomorrow morning has been called for 11am – with the action commencing from 11:30am. Don’t miss any of the exhilarating racing by tuning into www.pwaworldtour.com where you’ll be able to follow the amazing action as it happens via the PWA live stream and live ticker. 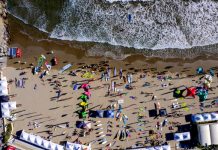