With two eliminations in the pocket and a forecast that could go either way, the top spots at Jinha Beach were far from locked in as we moved into the final day of the event. As the day started of cool and overcast, there was no guarantee the thermal winds would actually come through. But the Jinha Beach wind machine switched back on around lunchtime, setting the stage for another round of slalom fireworks.

First up were the men and after the first heat passed without incident, the second heat saw a massive upset as no less than four sailors went over early – and they were big names at that. Cyril Moussilmani (Starboard/Severne), Malte Reuscher (JP/NeilPryde), Andrea Ferin (RRD/Challenger Sails/AL360) and Finian Maynard (99 NoveNove/Avanti Sails) all jumped the gun and were done for the day. The premature start was especially upsetting for Moussilmani, who was looking to have his revenge for his early first round exit. Soon thereafter though, it turned out none of the male sailors would be able to make a dent in rankings, as the wind dropped and the men were released for the day and therefor the event. That meant yesterday’s standings remained as they were with Antoine Albeau (RRD/Neil Pryde) winning the first title of the year, Pierre Mortefon (Fanatic/North Sails) in second and Josh Angulo (Angulo/Gun Sails) in third.

With the men’s competition wrapped up, the bay belonged to the girls for the rest of the afternoon. And as luck would have it, conditions just seemed to get better and better. The first rounds saw the usual suspects go through to the final, featuring Sarah-Quita Offringa (Starboard/NeilPryde/Maui Ultra Fins/Mystic), Marion Mortefon (Patrik/Gun Sails), Ayako Suzuki (Tabou/GA Sails/Mystic), Cagla Kubat (Starboard/Severne), Valérie Ghibaudo (Tabou/GA Sails), Fulya Ünlü (Starboard/Severne), Delphine Cousin (Starboard/Gun Sails), Lena Erdil (Patrik/Point-7/Mystic/AL360), Mio Anayama (Starboard/NeilPryde) and Marion Dusart (Patrik/Gun Sails/Flymount). Ghibaudo deserves a bow for rocking up at the starting line today with a broken rib after a bad crash yesterday, which clearly couldn’t stop her from competing. But it was Erdil who lead the pack over the line and towards the first mark, with Offringa breathing down her neck. At the first mark, the runner-up from both the first and second elimination expertly squeezed out Offringa just before they went around the first inside buoy. Erdil kept her lead and extended it throughout the race, snatching victory from under Offringa’s nose and with it pole position in the event.

But Erdil would have to hold off on celebrating, as the wind was still pumping and the call was made to do one more round. Before it came to that, it was María Andrés (Fanatic/Gun Sails/Mystic/AL360), Haruna Furusawa (Starboard/Point-7/Mystic) and Nimet Tulumen (KA Sails) who got first, second and third in the losers final.

The fourth round final was a showdown between Erdil, Unlu, Cousin, Ghibaudo, Dusart, Offringa, Kubat, Suzuki, Anayama and Lescadieu. But the biggest battle was between Erdil and Offringa, both gunning for Korean gold. Right from the start, it was Offringa who dictated the pace, while Erdil didn’t have the best of starts. Offringa extended her lead throughout the race, with Cousin in second and Erdil watching her hopes for the event title shatter from third position. Offringa’s first position in the fleet was never in any danger and the Aruban crossed the finish line not only the winner of the heat, but of the event as well.

And there you have it. The 2015 PWA slalom season has got off to a flying start, with Antoine Albeau taking a first step to a world title hat trick in the men’s fleet, and Sara Quita Offringa proving she’s the woman to beat on the women’s side. With two rounds completed for the men and four for the women, the event’s top 10 and the current overall rankings are as follows:

Full results, rankings, images and highlight videos are up on the PWA website. Congratulations to the winners and thanks to all the riders and the event organizers for yet another great edition of the Ulsan PWA World Cup. Next stop on the PWA World Tour is the slalom event in Costa Brava, Spain from June 9 – 14. 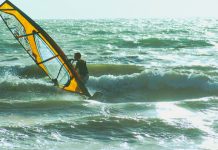 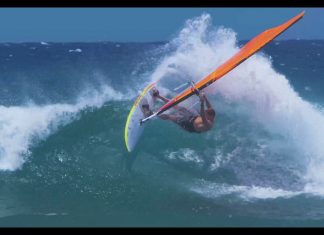